A downloadable game for Windows, macOS, and Linux

A Vampire Sandbox Adventure, made in 72 hours for Ludum Dare 33:

Somehow, your castle became a tourist trap while you slept. This is a problem. What's worse, your bat friend has been scared away, and you've got to rescue him! What's a Vampire to do? You could avoid the sun and keep a low profile until you find your friend, but that might be hard. You could try to scare them off, or even make them into a quick snack, but that could make things even more hectic. Or you could just go find some dark corner of the castle to nap in until this blows over... I'm not your boss.

Definitely late to the party, but this game has crashed twice on me (on Linux -- thanks for supporting that, by the way). Bug report is

Both times this happened, I had a lot of vamp minions. Dunno if that's relevant.

Also, the file "Dusted.wav" is referred to in the code as "dusted.wav" (a different bug that I "fixed" by renaming the file).

That aside, this is certainly a fun game! I've seen the premise before, and this is a very nice realization of it.

The game randomly closes for no reason that i can see 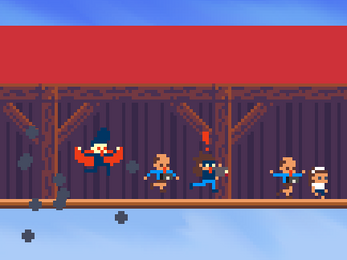